How To Balance Both Babies

Balancing life with a toddler can feel like a circus act most of the time, let alone when you throw a dog into the mix as well. Before my son became mobile our dog, Pandora, was rather unconcerned and uninterested with him. Occasionally she would investigate the little noise box when he began to cry, but other than that she more or less minded her own business. However, when my son, Embry, began to crawl then walk then sort-of run (it’s more of just a faster, less coordinated walk), Pandora started to take more notice. And my husband and I were met with a new challenge: keeping things peaceful and positive between the two.

Embry loves Pandora. His favorite thing to do is share his snacks and meals with her, which she of course thinks is great. This kindness has spawn a bit of a problem though, because Embry isn’t always trying to hand her food, though she can’t tell the difference since they’re basically the same height. So occasionally she’ll pull something out of his hand that he fully intended to eat and sometimes she can get a little pushy. Now, is this Pandora’s fault? Is she a bad dog? Absolutely not. She has learned that the child shares food and also doesn’t understand when he is trying to share with her versus not trying. My husband and I have begun creating space for Embry now while he is eating. We will sequester Pandora away, with a treat or toy of her own that she really enjoys until he has finished his snack or his meal and then have her return. She is thoroughly delighted to have the opportunity to have a peaceful moment to herself with her treat. He may enjoy sharing with her, but the latter effects of that behavior are confusing and unfair for Pandora. Creating space for Embry and teaching him to feed her less and less is important for their future together happily coexisting in our home. 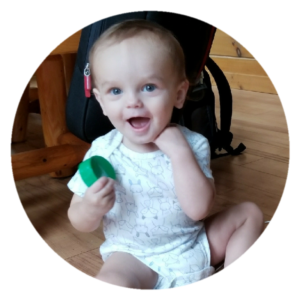 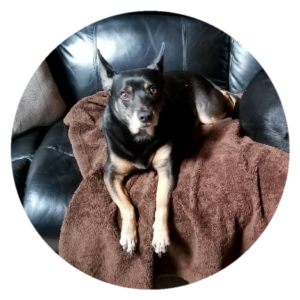 Toddlers tend to have big emotions. By that I mean when Embry is happy he runs around, laughs and babbles. When he is upset, however, he knocks stuff over, screams and hits things. One of the things he gravitates to when he’s happy or upset is Pandora. When he get overly excited he will run up to her while she’s resting and try to hug her or do other things that are not acceptable to our household rules. In either instance Pandora is not a happy camper. When he gets too excited we’ve been working with him on “soft or gentle pats”, which he and Pandora have responded to very well. When he is extremely upset there’s not much else we can do other than come to Pandora’s rescue and place her in her “kid-free” zone where she can feel safe and relaxed. With his ever fluctuating emotions, my husband and I have to be ready to create space for Pandora at any given time. No matter what the situation with our toddler, my husband and I want every experience to be a positive one – even if that mean Pandora gets to enjoy some fun-filled, quite time in her “kid-free” zone.

We of course want Embry and Pandora to have a wonderful and positive relationship, but right now they are two creatures that can’t outright verbalize their feelings and need us to referee now and again. Creating positive space for Embry from Pandora and vice versa is an extremely important part of building up a good relationship between them. Being conscious and taking into account how Pandora feels in any given situation lets my husband and I be sure we’re making the best choices that we can for our two-legged baby and our four-legged baby.