I Kicked My Own Dog out of Class

I Kicked My Own Dog out of Class 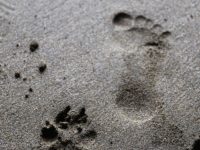 Not long ago, I was in the same position as all other puppy parents in the world. I adopted an American Pit Bull Terrier and Bullmastiff mix from a rescue and had my pick of two puppies. I decided to let my nine-year-old Golden Retriever rescue, Lucy, decide which puppy was a better fit for our family. Once I saw the interaction between the little male and Lucy, I knew he was the keeper. Lucy was play bowing, running around with him and alternating who played chase, and she even gave him a growl when he pulled on her fluffy tail (which would go on for many weeks following). And from that moment on, that little puppy was known as Levi, and boy did I have my hands full!

Levi got to go to work with me everyday, and a few days out of the week he was in playgroups in our daycare program. He quickly blossomed into the social butterfly! One day he was with really big dogs, the next with the small dogs, and he made best friends along the way. Every Saturday, Levi would join a class we had at the time called “puppy social”. That’s where I noticed problems-problems that I didn’t like and I struggled with in training.

Levi was great with his body language and presentation. He always sniffed the dog’s butt first and said hello. He did lots of displacement behaviors with the nervous dogs where he would avoid eye contact, scratch his neck, or just turn and run away, he would play bow, turn his backside to them and become vulnerable, show them he is not a threat, bark to entice them to play, and even lay down! I noticed at this time, Levi had a special way with dogs and puppies that were anxious, but the ones that would play with him brought out a side I wasn’t happy to see. But Levi played over-exuberantly with puppies.

Levi often couldn’t control his excitement with a puppy that was reciprocating play, so he would latch onto the other puppy’s tail or skin. Latching is what we like to call a precursor, and it is a huge red flag. When one puppy grabs a hold of another and won’t let go, you risk one dog getting injured or starting a scuffle. Latching is a precursor for a ‘grab and shake’ and this is essentially what predatory animals do in order to kill their prey. Some people say their dogs do it with toys, blankets, etc. However, it is completely unacceptable and is not any kind of play.

The moment I saw Levi latch on to a dog, I became concerned. He had never done this with any large dogs in daycare, so why would he do this to another puppy his own age and size? The answer: excitability. Levi has a very low threshold when he becomes excited, he gets into this mindset where he can’t control what he does, and he’s so excited he can’t stop or let go of what is going on. I tried everything I knew. First, timeouts, but those just escalated this behavior into a temper tantrum. Second, chicken nuggets; a high priority treat that he liked but didn’t get often unless it was a big deal (like going to the vet), but those only went so far.

Finally, the last idea I had was not to let him play with those puppies. We worked on exercising his mind and body by watching the other puppies play and not letting him participate because he could not act appropriately with them. Ultimately, I ended up kicking my own dog out of puppy socials because he could not play with other puppies appropriately.

I contacted Levi’s rescue and asked about the dogs he was fostered with. As it turns out, Levi was fostered with nine adult dogs of all ages and sizes, plus his three littermates. Levi had never learned what it was like to play with other puppies, other than his brother and sisters, so it made him too excited.

Levi still remains a social butterfly, and I can trust him with any dog he meets. However, he couldn’t play with other puppies and I was okay with that! It wasn’t the end of the world. I just knew it was never going to work, so I focused on something he could succeed at, which was interacting with adults and teaching anxious dogs how to play again.

I encourage you to sit down and watch and listen to your dog to help yourself and your family with this process. Also, don’t get discouraged by things your dog can’t do. Focus on what they can do, and do them so well that everyone around is in disbelief. I kicked my own dog out of one of the training programs and he’s doing just fine, because I put my focus of my work with him elsewhere.