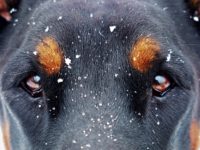 We get a lot of calls from families about differing dog training issues throughout the Northern Kentucky and Greater Cincinnati area about things they are experiencing with their young children, mobile infants and their dogs.

It was almost a year ago now when I first brought my son home from the hospital. Up until that moment I hadn’t given too much thought to the first meeting between him and our dog, but once we were in the car driving home it occurred to me, “What if it doesn’t go well?” From previous experience I knew that my dog, Pandora, didn’t care much for children, or new people, or new things for that matter – she was, and is, a very fearful dog. While I was pregnant the ‘meet and greet’ between them seemed so long off and I had so many other things going through my head as well, that I just kept putting the thought to the side. Then I found myself en route home, with a tiny little human that for so long had mostly felt like a compilation of symptoms and things I needed to be careful of, but now was actually here and Pandora was waiting.

When we arrived home Pandora was so ecstatic to see me, as we had stayed at the hospital for a few days, that she didn’t even pay attention to my husband at first and the car seat he had in his hand. Once we actually made it past her and into the living room, we set his car seat up off of the floor and on the couch. Probably a subconscious effort to create some distance between her and the baby, but to give her the opportunity to check things out. Pandora was unsure at first and approached slowly. She had at least seen the car seat before, since we had things laid out and prepared to go to the hospital, but now there was a strange, little creature inside of the car seat. She gave him a good couple of sniffs right on his face as he slept. He furrowed his brow, continued to sleep and Pandora turned back to us for attention. A rather uneventful first encounter to my relief.

The months passed and Pandora seemed to have grown rather fond of our son, Embry. When he cried after waking up from a nap, she would rush into the bedroom – usually beating even us to him. When we laid him down for ‘tummy time’ she would lick his toes or his head as she laid there with him. As Embry began to grow and develop, he began to take notice of things around him. One of his favorite things to watch was Pandora. Watching her prance around, play with her toys, eat, drink and all the other fascinating things dogs do. Embry began to gain his coordination and went from mastering the art of sitting up to becoming mobile and crawling.

And that’s when things changed.

Now that he could move around on his own Pandora started to become more leery of him. What started as being uncomfortable, quickly turned into several incidents of her growling and becoming vocal when he approached her. It wasn’t always, but when it did happen I felt the sinking feeling of the “woulda-coulda-shoulda’s” setting in. What would I do if something did happen? What could I have done to better prepare? What should I do now?
Approaching the situation with consideration to how Pandora was feeling, which I imagine was usually something like, “Why is this small creature coming up into my personal space and bopping me on my face? I clearly showed it that I don’t like that.”, was an important factor in our long term success as a family. Since dogs speak dog and babies speak babble, we didn’t have the option of sitting them both down for a long conversation to work out their differences. We had to find some sort of middle ground that made sense to everybody. With a lot of positive reinforcement and us doing our part of keeping the baby distracted and out of her space, especially when she was resting, the pair is getting along great these days. Pandora engages Embry with the occasional play bow and Embry enjoys trying to give her his baby toys. We will always continue to work with her and our son, as there are more bridges to cross, but having a plan is crucial. All things considered, we have been extremely lucky with the progress we have had. If things had not begun to improve, with the knowledge I have now since working at a Northern Kentucky dog boarding, dog daycare and dog training facility, we absolutely would have reached out for professional dog training.