Training vs. Socialization: What’s More Important for Your Puppy?

Training vs. Socialization: What’s More Important for Your Puppy? 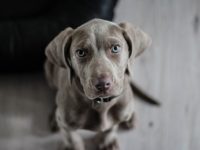 Puppy training vs. socialization is something that many pet owners find themselves faced with. Most people know it’s important for puppies to understand some basic behaviors such as sit so they display good manners. What most people don’t know is that socialization outweighs training in importance. This is because of the time sensitive socialization period that ends at around 14 weeks of age. After 14 weeks the all-important socialization window is shut and everything that occurred during that period will have lifelong consequences. What the consequences are depends upon whether or not the puppy had enough positive experiences. To ensure that the consequences are positive, puppy parents should focus on socializing using positive associations such as treats, praise and other fun things.

I have firsthand experience with the negative consequences resulting from an under-socialized puppy. Over six years ago I adopted a nine-week-old puppy from a local shelter. As soon as he was fully vaccinated I enrolled him in a training class where I taught him the basic behaviors. He excelled. He was a quick learner and easy to train due to his high treat motivation. Over time I noticed some fear of meeting new people (especially men), but the trainers didn’t seem overly worried so I enrolled him in more classes. Eventually we completed training and certification for work as a therapy dog.

By this time he was over two years old. All of this training created a six-year-old dog that understands cues in multiple languages and knows everything from sit to stay; however, the lack of proper early socialization resulted in him being extremely fear aggressive. He will bark and growl at approaching strangers on walks, and reacts terribly to visitors at the front door. He was even pepper sprayed by the mailman after chasing him around the front yard. For almost a year he was so fearful he no longer wanted to go outside on walks. Just living with him is a tremendous amount of work and I would never wish these challenges upon any dog parent. If I had known then what I know now I could have saved him and myself years of agony. He will never be able to enjoy life as fully as I would have liked, but I work daily on his issues in order to give him a better quality of life. Don’t let this happen to your puppy. Take socialization seriously.